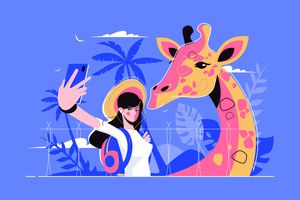 When influencers post clips and snapshots from their lives on TikTok or Instagram, they are often marketing not only themselves, but also a product suitable for the occasion. As propagators, they are paid to hold a selfie stick in one hand and the right toothpaste tube in the other first thing in the morning – tousled yet charming. As well as cash, they often receive non-cash benefits such as spa weekends or sandwich makers. Successful influencers sell the rights to their photos or their name, some have their own merchandise. They are often active – and liable to pay taxes – internationally. And that can get complicated.

For example, who is allowed to levy taxes when a YouTuber residing in Germany flies to London for a fashion show and takes a photo of himself wearing outfits from the fashion company that paid for the trip and is giving him an allowance? The influencer’s country of residence? Or the source country which – because of the fashion show – provides him with the right platform for his appearance? And what if he also flies to shows in Tokyo or New York for a lump sum? Assuming the source state can levy a tax: how is the tax revenue divided among the three countries? In principle, these issues are regulated by double taxation agreements (DTAs). Who is allowed to levy a tax depends not just on the type of revenue, but also on the type of activity being carried out.

Savvas Kostikidis examines all issues relating to the taxation of influencers using the OECD Model Convention, upon which a large part of DTAs are based worldwide. He argues that influencers are entertainers per Article 17 of the Model Convention, entertainers who amuse their followers with clips and posts from their lives. Accordingly, they can be taxed in the source country once engaged in entertainment activities. If, on the other hand, they sell the rights to their photos or generate income from merchandise, this falls within Article 7 or Article 12 of the Convention and the country of residence may levy taxes. To divide tax revenue between multiple source countries, Kostikidis suggests a formula based on the promotional effectiveness of the influencer’s performance. And it is only logical to measure this in “likes”, “views”, “shares” or “comments” – a currency which should be easy to understand, at least for influencers.

For this article, Savvas Kostikidis received this year's "Award of the Almumni of the Max Planck Institute for Tax Law and Public Finance".